Yeah, that link.
No, really, you can sit down again now, it's quite not like that...
Short on the heels of Der Spiegel's article on homeopathy, I get sent this interesting followup, which describes some of the circumstances around the Nazis and homeopathy. 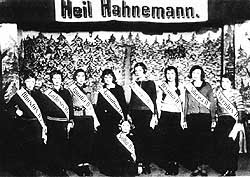 on concentration camp inmates) which, predictably, showed that homeopathic remedies had no effect on illnesses except a placebo effect. Basically prayer in pill form. So the studies were suppressed for decades, until the "Donner Report" (written by one of the participating doctors) was released in the mid-1990s.

The gist of it is this: Nazi doctors discovered that homeopathy is bunk. (Just because we disagree with their ideology does not mean we must discredit their research, which was rigorously done) However, this research was suppressed because having medicine made by a German, Samuel Hahnemann, was much more fitting to their ideology and propaganda than conventional medicine, which was often practiced by Jews. Thus, a culture is made.
Full article here on German Joys by Andrew Hammel.
Lagt inn av Bendik kl. 10:10 AM