It hasn't really been much of an issue here before. Here in Norway we enjoy a generally secular society, free of the meddling of the religious. Perhaps one of the reasons is that we have an official state church, and it has grown increasingly more laid-back and accepting in the later years, in order to attract more members. But that is not the main issue here.

Dagbladet.no has an article this week (link is in Norwegian) about creationists. There is really not a big movement for it, but it serves as a warning sign that most likely we can experience them here soon. 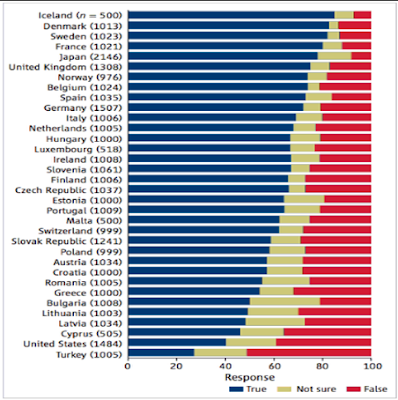 On the right here is a graph which I am somewhat proud of. It is a response to the question of whether one accepts the Theory of Evolution or not. Norway scores quite high, though not all the way at the top. (Norway has always been slightly behind Denmark and Sweden in issues like these)

Down way at the bottom is the United States and Turkey. They are what the article mainly concerns itself with. From Turkey we get Harun Yahya, well-known crackpot creationist. In our eyes he does not have a leg to stand on at all, all his claims are bogus and easily falsified.

The biggest objection from creationists is of course that Evolution leads to Social Darwinism. We disagree vehemently. Ol' Pappy Dawkins says so quite outright in The Selfish Gene, on the very first page of the book, "My own feeling is that a human society based simply on the gene’s law of universal ruthless selfishness would be a very nasty society in which to live."

There is an "is/ought" dichtotomy here. Just because the world we live in from nature's side is ruthless and cruel, does not mean that we should apply that to our own society.

Anyway, back to our creationists. I never quite understood why their main objection is with evolution and not with, say, the big bang theory. Or abiogenesis (though a lot of them seem to confuse evolution with abiogenesis and, surprisingly often, with cosmology too)

If the creationism movement ever gains a footing in Norway we will be on the frontlines demanding that the proper, Norse version is taught. It is way more badass than this pansy Christian one that they are usually trying to peddle.

In the beginning there was nothing except for the ice of Niflheim, to the north, and the fire of Muspelheim, to the south. Between them was a yawning gap (the phrase is sometimes left untranslated as a proper name: Ginnungagap), and in this gap a few pieces of ice met a few sparks of fire. The ice melted to form Eiter, which formed the bodies of the hermaphrodite giant Ymir and the cow Auðumbla, whose milk fed Ymir. Auðumbla fed by licking the rime ice, and slowly she uncovered a man's hair. After a day, she had uncovered his face. After another day, she had uncovered him completely: Búri.

Ymir fathered Thrudgelmir, as well as two humans, one man and one woman. Búri fathered Borr. Borr had three sons, Vili, Ve, and Odin, who killed the giant Ymir. In the vast flood of Ymir's blood, Þrúðgelmir was also drowned, although not before he had fathered Bergelmir. Bergelmir and his wife hid in a hollow tree trunk and survived. Odin and his brothers used Ymir's body to create the universe : they ground his flesh into dirt, and the maggots that appeared in his flesh became the dwarves that live under the earth. His bones became the mountains, and Odin strewed his brains into the sky to create the clouds. The universe comprises nine worlds, of which this earth (Midgard) is central.

They placed four dwarves: Norðri (North), Suðri (South), Austri (East), and Vestri (West) to hold up Ymir's skull and create the heavens. Then using sparks from Muspelheim, the gods created the sun, moon and stars. As Odin and two others (differing between the Poetic Edda and Prose Edda) walked along the beach, they found two pieces of driftwood. From these, they created the first human beings: Ask and Embla. Ymir's eyebrows were used to create a place where the human race could live in; a place called Midgard.

The gods regulated the passage of the days and nights, as well as the seasons. Sól is the personified sun, a daughter of Mundilfari, and wife of Glen. Every day, she rides through the sky on her chariot, pulled by two horses named Árvakr and Alsviðr. Sól is chased during the day by Sköll, a wolf that wants to devour her. It is foretold that Sköll will eventually catch Sol and eat her during Ragnarök; however, she will first give birth to a daughter as fair as she. Sól's brother Máni, the personified moon, is chased by Hati Hróðvitnisson, another wolf. The earth is protected from the full heat of the sun by the shield Svalinn, which is placed before Sól.